This project is the first "picture-in-picture" LED display project with intelligent pixel density switchover in China. It adopts EXC-LED pixel light; the pixel pitch of the densest part in the middle is 3cm. This part can directly play News Broadcast, while the pixel pitch in other parts is 10cm. The video display of LED pixel light with two densities can realize independent display respectively and overall display; the intelligent pixel density may be switched over during the process. The embedded buckle installation method is adopted so that the appearance of the building is not affected during the day and the building becomes a magnificent giant curtain at night. 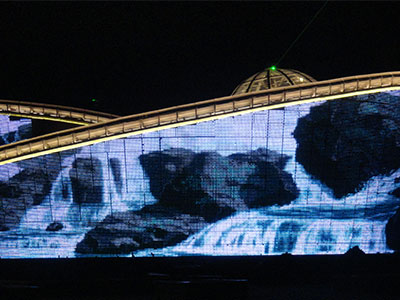